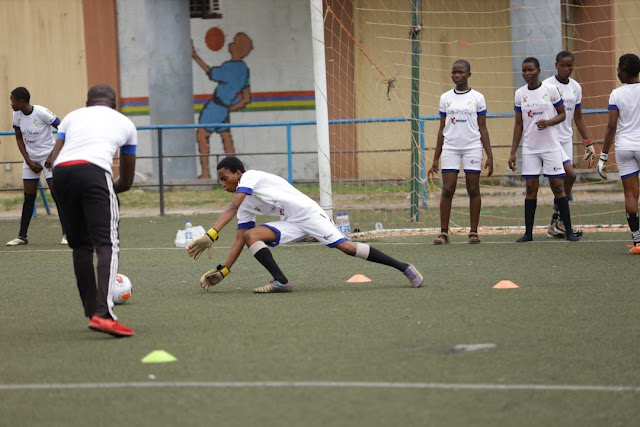 The Nigeria Football Federation (NFF) has declared its support for Super Falcons striker, and FC Barcelona star, Asisat Oshoala, who is striving to help the girl-child attain laudable heights in education and football.

“The NFF is delighted that Oshoala is putting up this championship to promote education and football among girls in Nigeria and Africa. I am glad that girls from across the country are participating in the championship to exhibit their skills.

“By next year, the federation will be more involved in the championship and also encourage other organizations or individuals, who are ready to put up programs like this. It must not be financed, but moral support will go a long way to motivate the organizers,” he said.

Nigeria Olympic Gold medalist, Chioma Ajunwa, who was a special guest at the program, enjoined the participants at the event to be disciplined and focused in the championship.

“Getting girls to showcase their talents in the football championship will assist more female talents to emerge in football.

“Oshoala is doing a good job to encourage the girl-child to become somebody in life. The girls should use this opportunity to give their best. The female footballers should also realize, as they go on in their football career that getting educated should also be a priority.

“If you are not educated as a sports person, you will not attain the standard you set for yourself,” she said.

The championship, which had its first screening exercise yesterday, is divided into two groups of amateur footballers and secondary school players.

Players in the secondary school category, who are short on football skills, were groomed by experienced coaches from Barcelona Academy, before the amateur players began their screening.

After the first phase of screening, which will end tomorrow, talented players will be picked from the two groups to compete in the championship finals slated to hold from December 21 to 24.

According to the organizers, the MVP player of the tournament will be given football scholarship training to Spain, while the outstanding 23 players will be enrolled in the Barcelona Academy in Lagos by the Oshoala Foundation.