The Heracles Almelo hotshot has confessed that he never considered playing for Belgium as it would have been impossible to break into Roberto Martinez’s squad.

Dessers earlier revealed his desire to play for Nigeria – his mother’s place of birth – at international level rather than his country of birth Belgium. 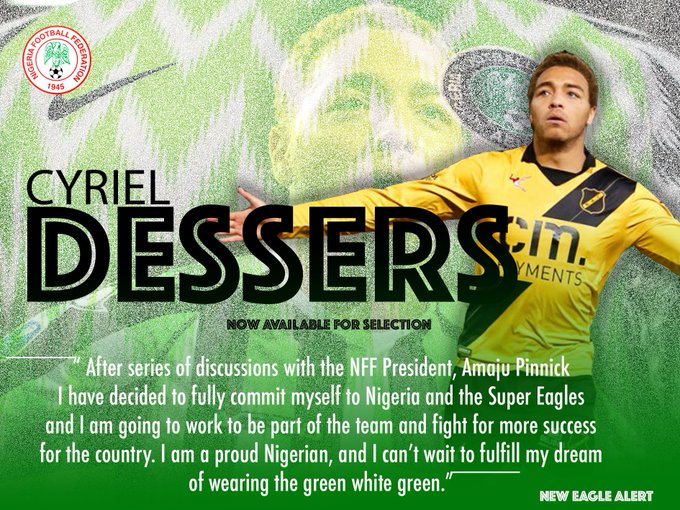 536 people are talking about this

That public declaration by the country’s top football body ignited the patriotic pride in the Dutch Eredivisie’s top goalscorer, a player who was named the league’s November Player of the Month after scoring six goals and producing three assists.

“I think it is a huge honour that they (NFF) have contacted and communicated to the outside world,” Dessers was quoted by Voetbal Belgie to have told TC/Tubantia.

“Belgium has never been a serious option, that’s why I don’t skip between the two countries. The Belgian team has the best generation ever, with top strikers like Lukaku, Batshuayi and Mertens. Boys my own age, who will play as long as I do. I have no illusions. ”

“I’ve never been to Nigeria. My grandfather and grandmother are from (Nigeria), my mother was born in Europe. When I look in the mirror, I see half a Nigerian every day. I also have characteristics of an African.”

Dessers has produced 11 goals and 5 assists in 16 matches for Heracles and will look to add to his tally when Frank Wormuth’s men face off with sixth-placed Utrecht on Sunday.